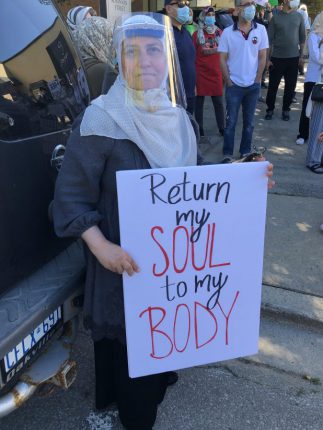 Canadians from across the country continue to protest in support of Oakville’s Yasser Ahmed Albaz, who remains in the Egyptian prison system. On Tuesday, his family demonstrated outside of the Prime Minister’s office (PMO) in Ottawa.

Yasser Ahmed Albaz is an engineer and business man who lives in Oakville with his family. The Egyptian government detained him at the Cairo airport last February, as he was preparing to return from a business trip.

His family was told early on that Yasser’s return was a top priority for the Trudeau government. It has now been 486 days since he was arrested and he has been in Egypt’s notorious Tora Prison the whole time.

Last Thursday, the Albaz family learned that their father was suffering from the symptoms of COVID-19. Another prisoner has apparently already died of the disease. Yasser was moved to a hospital then put into isolation within the prison.

Yasser’s wife at a protest Friday.

Yasser’s family is now participating in daily protests to convince the Federal government to push Egypt harder and secure his release. The first protest was last Friday outside of Oakville MP Anita Anand’s office. Since then, there have been ten protests, including Wednesday’s out the PMO.

Yasser’s family protests outside of the PMO in Ottawa.

The Prime Minister was asked about Yasser’s case at a Tuesday morning press conference.

“We have continued to get consular support and access and it’s something this government takes very seriously, the health and safety of Canadians abroad,” the Prime Minister said. “We will continue to do everything we can to assure they are properly treated and eventually, if possible, brought home.”

This response did not do much to satisfy the Albaz family, they point out that Trudeau did not even mention Yasser by name.

“We know that this will only get resolved if the Prime Minister takes ownership of the issue,” says Amal Albaz, Yasser’s daughter. “I expected much more from our Prime Minister. My response to him today is that what he offered Canadians is simply not enough. He didn’t even say my father’s name and to me someone without a name is someone who doesn’t exist.”

Yasser Albaz is a man whose presence is felt in communities all over the country. Protests on his behalf have taken place in Oakville, London, Toronto, Mississauga, Waterloo and Ottawa. Furthermore, Amal says that she has received messages from across Canada.

“People are asking from city’s all over the country, I’m talking Calgary, Edmonton, Vancouver, Montreal. They’re all asking when they can protest,” she says. “People are just self-motivated because everyone is just terribly concerned for his life right now.”

Over the weekend, more than 400 people attended a protest outside of the office of MP Karina Gould in Burlington. Amal says that it will all continue until something is finally done to help her father.

“What I’m sure of is that these protests will not stop until we see real action from our Prime Minister. Take full responsibility, take ownership and secure my father’s immediate release so he can return home,” she says.

If people want to help, the family says the best way is to visit www.freeyasser.ca and read the ‘call to action’ section. This list includes pressuring MP’s to commit to helping Yasser, donating to the cause and signing petitions.

The website also features a counter that logs the length of Yasser’s imprisonment. At the time of writing, it sits at 486 days, 2 hours and 48 minutes.