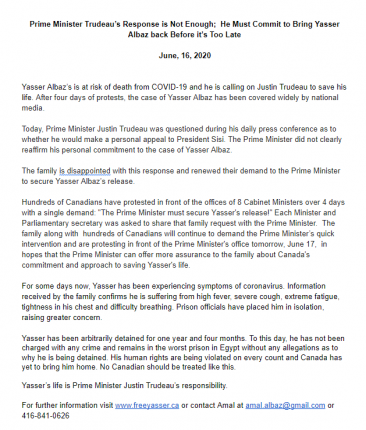 Yasser Albaz’s is at risk of death from COVID-19 and he is calling on Justin Trudeau to save his life. After four days of protests, the case of Yasser Albaz has been covered widely by national media.

Today, Prime Minister Justin Trudeau was questioned during his daily press conference as to whether he would make a personal appeal to President Sisi. The Prime Minister did not clearly reaffirm his personal commitment to the case of Yasser Albaz.

The family is disappointed with this response and renewed their demand to the Prime Minister to secure Yasser Albaz’s release.

For some days now, Yasser has been experiencing symptoms of coronavirus. Information received by the family confirms he is suffering from high fever, severe cough, extreme fatigue, tightness in his chest and difficulty breathing. Prison officials have placed him in isolation, raising greater concern.

Yasser has been arbitrarily detained for one year and four months. To this day, he has not been charged with any crime and remains in the worst prison in Egypt without any allegations as to why he is being detained. His human rights are being violated on every count and Canada has yet to bring him home. No Canadian should be treated like this.

For further information visit www.freeyasser.ca or contact Amal at amal.albaz@gmail.com or 416-841-0626