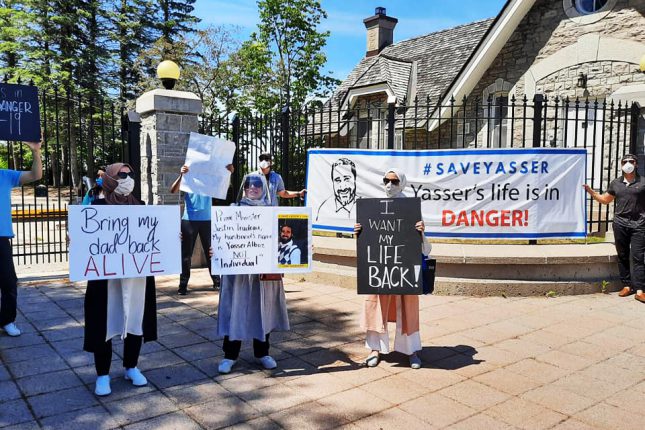 Yasser Albaz, a Canadian, has been imprisoned without charge in Egypt’s notorious Torah prison for 16 months. The Egyptian government has given no reason for his detention, and his continued imprisonment is a grave violation of his most fundamental human rights. This is without even considering that COVID-19 is spreading throughout the prison, and Yasser has been experiencing COVID-19 symptoms for the past several days.

The ICLMG is joining his family and thousands across Canada calling on Prime Minister Trudeau to take action at the highest level to bring Yasser Albaz home. You can take action at www.freeyasser.ca.

Below is the statement delivered by Tim McSorley, ICLMG National Coordinator, at the rally to bring Yasser Albaz home in front of the Prime Minister’s office on June 17, 2020.

“Thank you everyone for being here, and thank you to Amal, Safaa and the Albaz family for inviting me to join them here today.

My name is Tim McSorley, I’m the national coordinator with the International Civil Liberties Monitoring Group. I’m here today on behalf of our 47 member organizations – faith based, labour, social justice, environmental groups – to say enough is enough, Yasser Albaz must come home to Canada, and Prime Minister Trudeau needs to make it happen.

Sixteen months ago, in February 2019, we were informed about Yasser’s imprisonment. We’ve added our voice ever since in order to denounce his indefinite, illegal imprisonment in Egypt and to demand that the Canadian government take all action necessary to bring him home. We had seen this before with other Canadians. We knew the terrible conditions of Torah prison, and we spoke out with others calling for the government to act. We hoped against hope that Yasser would be home soon.

It is unacceptable and shameful that 16 months later, Yasser remains in prison in Egypt.

And it’s important to be clear: he was arrested without charge. He has never been charged. His ongoing and indefinite imprisonment is illegal, violating his most fundamental human rights and in violation of international law.

It is the responsibility of the Canadian government to defend the rights of its citizens, especially those held in such dangerous and illegal conditions as Yasser is facing right now.

And this is all without even considering the new urgency of the COVID-19 pandemic and Yasser’s deteriorating health. So far, Canada has repatriated 40,000 Canadians back to our country. But Yasser remains in prison.

Yasser deserves the same protections as everyone else. Prime Minister Trudeau and Foreign Affairs Minister Champagne must act now.

Father’s Day is this weekend. I can’t imagine how I would feel if my father was imprisoned, his life under threat, in another country. Amal and her family shouldn’t have to spend another father’s day without their dad. Please go on their site, FreeYasser.ca, look them up on Facebook, and send your own message to Prime Minister Trudeau and to your MPs demanding that they bring Yasser home.”