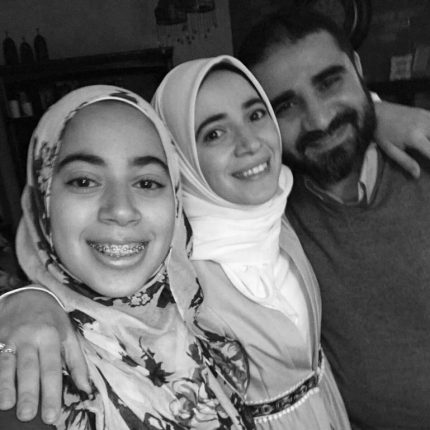 Missed birthdays and graduations. An empty seat at a wedding. A child who barely knows his grandfather.

The last 16 months have been a “nightmare” for Amal Ahmed Albaz and her family in Oakville, Ont.

Her father, Yasser Albaz, has been imprisoned in Egypt since February 2019, when he was detained at the airport in Cairo while on his way home from a business trip. His detention has been widely condemned as arbitrary, as he hasn’t been charged with anything.

Just weeks away from welcoming her third child, Amal’s pain is all the more searing.

“My four-year-old thinks his grandfather is still on a plane coming back home and it’s just taking a really long time. And here I am, about to give birth. I can only hope he’s here with us for that,” she told Global News.

“We’re living this nightmare. It doesn’t feel like a dream.”

Amal has been fighting tirelessly to bring Albaz home and escalate his case to the Canadian government. That fight took on a new sense of urgency one week ago when the family received word he may have contracted COVID-19 in prison.

“It is literally a matter of life and death right now,” she said. “We cannot waste another second because I don’t know if my father has that second.”

He has “all the classic symptoms,” Amal said, including severe cough, high fever, difficulty breathing, and tightness in his chest. The family said they received “reliable information” about his health after another prisoner in the same wing died of the virus. Albaz, 52, also has pre-existing health conditions that make him more susceptible to the virus.

“On top of that, there’s the horrible condition of the prison,” she said. “Cramped cells, no ventilation, sleeping on a cold, concrete floor, no medication. None of that whatsoever.”

Tora Prison in Cairo is notorious for its high security and dire conditions. Inmates are held in degrading environments and often refused medical treatment — something Amal believes is only worsening his health.

At some point, Albaz was transferred from prison to a hospital, she said. He was eventually returned to the prison and placed in isolation.

“That just shows you how serious his condition is,” she said. “He’s in isolation. We have no idea what his health is like right now. We can only assume that it’s getting worse and worse.”

In the week since the family heard about his ailing health, Amal organized nine different protests to raise awareness about their dire situation, including one outside 24 Sussex. Hundreds of supporters gathered in Ontario cities, including Ottawa, demanding the federal government secure his release and bring Albaz to Canada for medical treatment.

Still, the response from the government has been almost non-existent, she said.

“We’ve seen no commitment whatsoever,” she said. “We will not stop until we see that commitment.”

When asked about Albaz’s case, Prime Minister Justin Trudeau said on June 16 that he takes “very seriously the health and safety of Canadians detained abroad” and that his government will “continue to do everything we can to ensure that they are properly treated and, eventually, if possible, brought home.”

Back in February, Trudeau raised the case with Egyptian President Abdel Fattah el-Sisi during a visit to the African Union summit.

Nearly 500 days in, the reason for Albaz’s imprisonment is still unknown. He is a Canadian citizen and was travelling on his Canadian passport at the time.STORY CONTINUES BELOW ADVERTISEMENT

The sheer length of his detention is a clear indication that it’s arbitrary, said Justin Mohammed, a human rights law and policy campaigner with Amnesty International.

Mohammed said those reviews have not happened.

“So here we have an individual who has no concept of when that detention will end,” he said. “That’s why we say that there is a fear that it’s indeterminate and could become indefinite.”

“There appears to be no continued judicial oversight over his detention,” Mohammed said.

“And the question as to what kind of ongoing consular support he’s receiving in light of his detention is a serious concern. We understand that there’s a particular context around COVID-19, but that doesn’t absolve the government of its responsibilities to advocate vigorously on behalf of a Canadian citizen who is in detention, particularly in these types of circumstances.”STORY CONTINUES BELOW ADVERTISEMENT

In a statement to Global News, the agency noted that Foreign Affairs Minister François-Philippe Champagne “continues to raise this case at every opportunity with this counterpart, including earlier this month.” Citing the Privacy Act, it provided no further details.

COVID-19 complicates things, Mohammed acknowledged, but the government has “undertaken significant efforts to repatriate Canadians who found themselves affected by the pandemic abroad over the past few months.” This situation is just as serious, he said.

Canadian diplomats have been unable to visit Albaz in prison since March when the virus first began to proliferate, Amal said.

While Champagne has been responsive to her family, she doesn’t believe the government is doing enough. That feeling of neglect has been heightened in recent days, she said, given the attention surrounding the case of the two Canadians detained in China since 2018.STORY CONTINUES BELOW ADVERTISEMENT

“I feel offended that he knows the names of those in China and that he didn’t mention my father’s,” Amal said. “By all means, they deserve to come home as well, but I genuinely feel the Liberal government has failed my family. They haven’t been able to work with Egypt — a so-called ally, a friend. It really speaks to Canada’s place on the foreign table.”

Amal was hopeful the week of protests would bring about more action, but that doesn’t mean her fight to secure her father’s release will slow. Until the government commits, Amal said she will continue to stand on the streets and shout for his life.

“My father is sitting in the worst of conditions. We only have one demand of Trudeau and our country — do not bring him back in a box.”

— With files from the Canadian Press