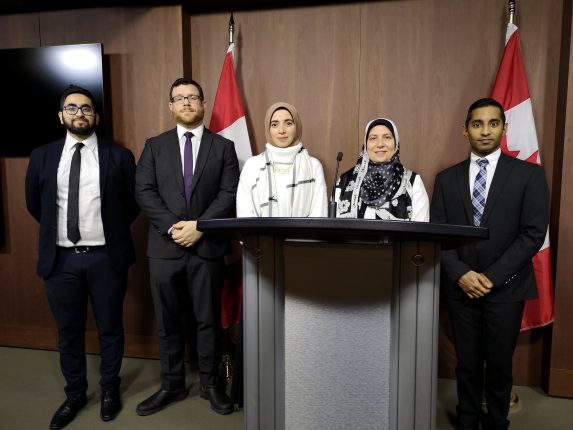 The family of a Canadian man who has been in a Cairo prison for the last 10 months wants Foreign Affairs Minister Francois-Philippe Champagne, who is in Egypt this week, to secure his release and bring him home.

“My father has been asking every single day what Canada is doing to get him out and bring him home,” his daughter, Amal Ahmed Albaz, said at a news conference in Ottawa on Wednesday.

“We need more than just caring,” she said.

Yasser Ahmed Albaz, a 51-year-old engineer from Oakville, Ont., has been in a Cairo prison since February, when he was detained at the airport on his way home from a business trip. He is a dual citizen who was travelling on his Canadian passport.

Adam Austen, a spokesman for Champagne, said the foreign affairs minister raised the case directly with his Egyptian counterpart Wednesday.

Champagne is in Aswan, Egypt, this week for an African development conference.

“We will continue to raise it at the highest levels of the Egyptian government and consular officials will remain in regular contact with local authorities,” Austen wrote in an email Wednesday. He said he could provide no further details for privacy reasons.

Amal Ahmed Albaz said her family still does not know why her father was detained and questioned and that he has not been charged.

“My father has done absolutely nothing wrong. He has suffered immensely,” she said.

“He needs medical help and he needs to be reunited with our family.”

“Ongoing detention without charge is unacceptable and the minister must ensure that his Egyptian counterparts put an immediate end to the human rights abuses that Yasser is suffering,” he said at the news conference Wednesday.

The family has been told by his lawyer that Yasser Ahmed Albaz is being held in the Tora Prison complex in Cairo, which has been the subject of concern by various human rights groups in recent years.

His daughter said he immigrated to Canada from Egypt more than 20 years ago and that the Egyptian government is aware that he is Canadian.

“He’s done absolutely nothing wrong. He has no political affiliation whatsoever,” she said. “He’s not active politically, so this came as a complete shock to our family when it happened and to this day we are very concerned and we’re very confused.”

His wife, Safaa Eleshmawy, said the role that her husband played in the community is one of the reasons he has so much support.

“He dedicated his life to help others,” she said.

She said he never turned his back when he saw someone in need.STORY CONTINUES BELOW ADVERTISEMENT

“A country should be proud of such a citizen and not leave him behind.”