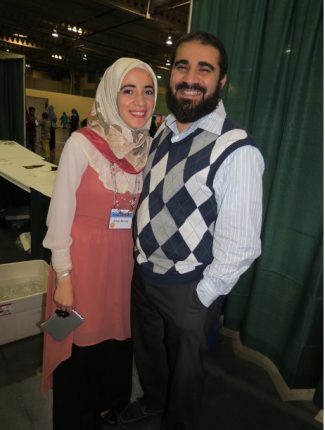 Last month as Egypt’s President Abdel Fattah el Sisi was mingling with senior European leaders in the resort city of Sharm el Sheikh, a 24-year-old Amal Ahmed was busy in Canada mobilising support for her father who had been detained by the Egyptian authorities.

After a short business trip, Yasser Ahmed Albaz, 51, was about to board a Canada-bound flight on February 18 at the Cairo International Airport when his passport was taken away and his bags brought down from the plane.

“At 10 o’clock he wrote on our family Whatsapp group that he loved us. We didn’t hear from him for a week,” Amal told TRT World over the phone from her home in Oakville, Ontario, where the family of five has lived for 20 years.

Initially, the Egyptian authorities denied Albaz was in their custody.  Then he was brought before the prosecutor a week later.

“He hasn’t been charged with anything,” says Amal.

The family’s biggest concern is that Albaz is being kept at the Tora Prison, which is notorious as a place where prisoners are routinely tortured.

Amal says she and her family travels to Egypt regularly. “We were there just last summer to celebrate my younger sister’s engagement. Nothing like this has ever happened. We have never been questioned or anything like that.”

The Egyptian government is accused of arbitrarily arresting thousands of political and civil rights activists on fabricated charges.

While American and European lawmakers have voiced concerns over human rights violations, their governments continue to back Sisi, a former military commander who came to power in a coup in 2013.

Since then the Egyptian military has used brutal force to stifle any sort of dissent – often with the indirect backing of its western allies.

In the month of February alone Egypt executed 15 men after trials which the United Nations and other human rights organisations termed ‘unfair’.

It has made some European lawmakers question the close ties with Sisi’s government.

“We cannot deny the fact that holding of the summit in Egypt at the court of the Pharaoh Al Sisi, has recognised, by default, the authority of the Egyptian dictator,” Pier Antonio Panzeri, a member of the European Parliament, told TRT World.

Panzeri, an Italian, heads the EU’s Subcommittee on Human Rights which has been pressing Egypt to solve the case of Giulio Regeni, the young researcher who was murdered in Cairo in 2016.

“It thus seems absurd that the heads of European governments can truly believe the promises made by the Egyptian leader,” said Panzeri. Particularly, he added, when Sisi is seeking to amend the constitution to extend his rule and his government had just executed so many people.

EU leaders such as French President Emmanuel Macron consider Egypt important in fighting terrorism and stemming the flow of refugees.

France has become Egypt’s largest supplier of military equipment even as human rights organisations say that weapons meant to be deployed against terrorists are used against dissidents.

“The alarmist political narrative (of migration) that has spread through the EU member states in recent years – especially those bordering the Mediterranean – has increased citizens’ concerns about the issue exponentially,” says Panzeri.

“For this reason, many countries have preferred to close their eyes to the human rights situation, provided that Egypt takes responsibility for migrants from other African countries, thus acting as a barrier.”

The EU has struggled to come up with a collective response to Egypt because individual member states have their own bilateral interests to look after, he says.

“Let us not forget that the European Union is a fundamental trading partner for Egypt, and trade can therefore be used as a tool to force the North African country to meet certain standards in the field of human rights.”

Egypt has even detained US citizens, which gives over a billion dollars in military and economic aid to Sisi’s government every year.

Hosam Khalaf and Ola al Qaradawi, both from the United States, have been in an Egyptian prison since June 2017 without any charges.

Washington also looks at its decades-old ally from the prism of security.

Amid these varying policy interests, Amal is hoping for her father’s return. “It has been a shock for us and I hope the Canadian Prime Minister Justin Trudeau will take up the issue.”