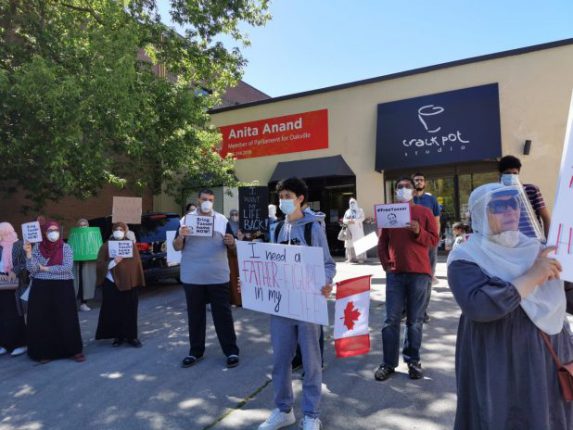 Yasser Ahmed Albaz has been illegally detained in Egypt for a year and half. He began developing COVID-19 symptoms in prison on Thursday. Since then, his family and community have been protesting for decisive action by the Canadian government.

Yasser Albaz travelled to Egypt for business in December 2018. He is a dual citizen and a well-known member of the Oakville community. He planned to return to Canada by Family Day 2019 but was detained at the airport without any explanation or warrant. Since then, his family has worked tirelessly to get him back by working with the Canadian government.

Protests on Friday outside the downtown office of Liberal MP Anita Anand.

“He disappeared for several days and nobody knew where he was. He was unaccounted for,” says his daughter Amal Albaz. “They just made him disappear. If we are talking about Human Rights Laws, to this day, he hasn’t been charged with anything. The Egyptians have never shared any information as to why they’re holding him. It’s just arbitrary detention.”

Yasser Albaz now sits in Tora Prison, one of the most infamous institutions in all of Egypt. For the past year and a half, his family has only been able to hear from him through a relative who lives in Egypt.

“He was able to visit him in prison every couple of weeks or so,” Amal says. “But since COVID-19 began in February and March, no one has been able to visit or see him.”

The Albaz family hadn’t heard from Yasser for months when they found out that he had begun suffering from the symptoms of COVID-19.

“Somehow he got that message out and let us know that he was suffering. He says that he is writing his will because he feels that this it it,” Amal says.

This has left Amal and the rest of the family angry and frustrated. Not only at Yasser’s imprisonment or the illness he’s developed but with their government for allowing everything to reach this point.

The conditions inside Tora Prison are bad under normal circumstances. The cells are overcrowded, there is little sanitation or access to medical care. During a pandemic, staying there could be a death sentence.

Prime Minister Trudeau and his cabinet have made some efforts to arrange for Yasser’s return. The Prime Minister mentioned the case once during a discussion with the Egyptian President. Foreign Minister Francois-Philippe Champagne did the same. Nothing has worked. Amal believes that the time for ‘soft diplomacy’ is over now though.

“The government says that this case is a top priority, but mentioning it on a phone call just isn’t enough. That is not going to guarantee my father’s freedom,” Amal says. “We are able to reach out but unfortunately there have just been no updates. This case has not changed since it’s beginning. Just mentioning the case on a phone call isn’t enough. It’s not going to guarantee anyone’s freedom. There needs to be a demand for my father’s release. He is there against international law and his human rights are being violated on every count.”

For the past year and a half, the Albaz family has been trying to work with the government.

“People have been wanting to protest for so long and, you know, my family has been saying: let’s be patient, trust the government, they’re working on something,” Amal says.

After learning of their father’s illness, they increased the pressure. On Friday, there were protests outside the offices of prominent Liberal politicians in Mississauga and Toronto. There was one in Oakville, outside the office of MP Anita Anand. Minister Anand was not present but members of her staff came out to talk to the protesters.

“People are just burning with anger and frustration. My father is well known in the community. His impact was always obvious and everyone feels his loss right now. Everyone’s angry, everyone’s frustrated, and that’s what drives the protests,” Amal says.Advertisement

The protests were organized primarily over social media. The Albaz family has been reaching out to other community members through Facebook and Twitter. Their change.org petition, addressed to Justin Trudeau, has received over 49,000 signatures.

Dozens showed up in Oakville. More demonstrations are planned for tomorrow.

“I think today was great, I hope our government hears us and understands the pain that we’re going through,” Amal says. “The idea that we might never hear his voice again or see his face again, that is just something no one could stand.”

Signs held at the protest said many different things. They all translated into one demand though: decisive action from the federal government.

“There’s never been really any indication that the Canadian government is actually taking this seriously,” Amal says. “I would love to believe they’re statements, but at the end of the day, it’s been a year and a half and there have been no results. How can you tell me this case is a top priority when he is about to die in the worst prison in Egypt? It doesn’t make sense to me.”

The protests for Yasser Ahmed Albaz’s release on Saturday will be held in Burlington and Waterloo.

“Every Canadian has a right to return home,” Amal says. “My father never did anything wrong and the Canadian government certainly hasn’t done enough.”