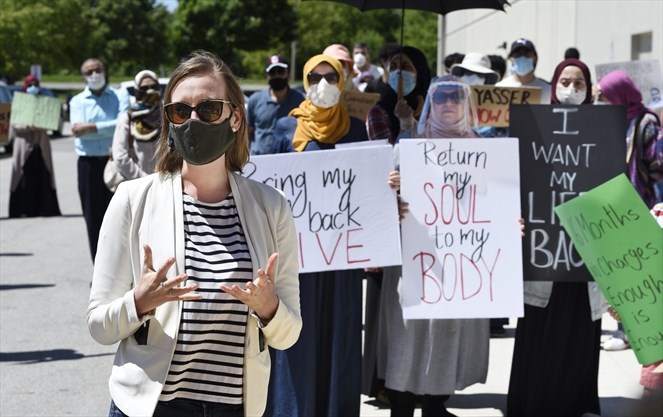 Amal Albaz the daughter of Canadian citizen Yasser Albaz who has been detained in an Egyptian prison for over a year, is joined by her mother Safaa Elashmawy and her sister Maryam and a few hundred supporters for a protest outside of Burlington MP Karina Gould constituency office. – Graham Paine/Torstar

Burlington was the latest stop in the ongoing campaign to bring an ill Canadian detained in Egypt home.

At the forefront of these efforts is Amal Albaz — daughter of Yasser Albaz — who was joined by her mother Safaa Elashmawy, sister Maryam and roughly 80 supporters for a protest outside MP Karina Gould’s Guelph Line constituency office Saturday afternoon.

The MP spoke with Amal and her family, who’ve visited numerous communities in recent months in a desperate plea to have Prime Minister Justin Trudeau push for Yasser’s release.

His family says he’s been experiencing coronavirus-like symptoms and due to pre-existing medical conditions is in an especially vulnerable state — requiring immediate medical care.